Hanging out in rented indoor space on a slow Sunday afternoon. Chilly outside finally, and this week the leaves quickly turned fiery shades of autumn. A soft yellow glow reflects off the otherwise bare walls, courtesy of a vibrant maple outside the window. Apartment living has never been something I’ve desired, but more of an occasional necessity the three times I’ve gone to school now. I wonder if it’s the same for everyone here, or if most don’t mind at all. I think it’s very strange, and hard to deal with at times, the isolation in the midst of a shared environment.

Interactions, rare and disappointing both, exacerbate feelings of societal detachment, something I experience each day that I’m here. Most of it stems from spending significant time on a college campus, surrounded by hordes of downward drooling zombies. Everyone plugged in to one device or another, muttering away to no one in sight. Even in pairs or groups, it’s the same, which I truly fail to understand. I imagine that these same people, if instantly transported to be among whomever they’re digitally engaging with at the time, would immediately shift to messaging the one’s they’re walking with in the moment, ignoring the other sect mid-text.

At the apartment building, however, it’s more that I know there are people all around me, though rarely see them, only hear their footsteps, their laughter, their occasional bickering through the walls and vents around me. Most of the time, I don’t even know which unit the voices emanate from, the chatter of living ghosts. Graciously, that’s all I’m privy to, through the floors and ceilings and separations, though it’s hard to imagine intimacy occurring in a society where self-absorbed cellular masses sit across from significant others at romantic restaurant tables, unspeaking. Both of them staring down at screens, mindlessly moving fork to mouth, sharing more of the meal with Instagram aficionados than their lover.

I heard a quote recently, supposedly from nomadic tribes in northern Africa: “Houses are the graves of the living” – how long did I live with the same belief, now personified in my daily dealings and roundward dodgings with these inane ambulatory spirits. Yet I now pay a premium each month to dwell in a red-brick catacomb.

To these finger fidgeting ghouls, however, it is I who is invisible to them. And it feels that way, distinctly, when we pass in the hallways, as seldom as that may be. Their eyes averted quickly, perhaps a faint nervous mumble in response to offered greeting, a swift shuffling of steps followed by the sound of a closing door.

Perhaps the only life they want others to view is the one they produce for fellow screen lookers, that mad group of bent-necked mouth-breathers greedy for any life but the one they’ve been self-confined to. Ever scared to dream, to gaze into blue sky, to stare at the sun. To look up. Content, as it were, to passively consume the creativity of others, rather than fashion a physical life to be proud of, one to look forward from unashamed, and smile at a neighbor. Embarrassed, maybe, of what little lies behind those doors, of what happens when the screens go dead. Terrified of what horror might await in time spent alone, no incoming messages, a dearth of much craved distraction.

I’m sure I’m getting it all wrong. Perhaps it is I who should look to computer communities to alleviate my seclusion, no longer solitary or left behind. No further public embarrassment as I look down, constantly down, with everyone else, joining them in celebration of growing collective consciousness, rather than wallowing in pity at the loss of personal identity. Perhaps it’s about relationships and interactions after all. And what could I possibly know about anyone else anyway, without realizing their status, without proper recognition of their legions of friends and followers?

And how ironic, then, to write this in the first place. To consider adding this inanity to that of so many disembodied voices, a feeble whimper in the ethereal vacuum of internet. To imagine that my words might be skimmed by the bowed heads of enslaved automatons. To type these words with those intentions as I sit here alone, admiring the shimmering fall colors from behind the sterility of a glass pane, far removed from the breeze outside. It’s time, for me at least, to look up. Look up, and look out. To go and let the wind do the greeting. 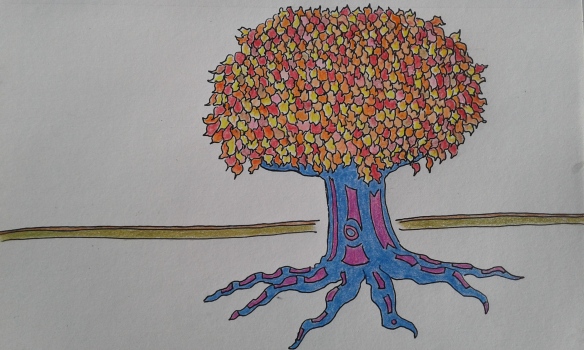